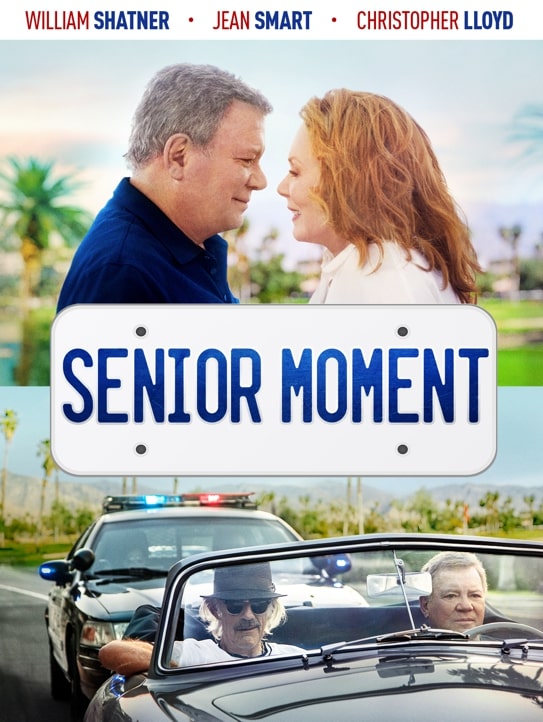 From 101 Films, Senior Moment – an old man comedy-drama featuring both Christopher Lloyd and William Shatner – is to have a Digital release on 28th June. Here’s what they had to say:

Take some time out for a Senior Moment, a hilarious film starring Hollywood heavyweights William Shatner, Christopher Lloyd and Jean Smart as a group of feisty old-timers, who are anything but grown-up. This comedy caper will sweep you away to sunny Florida for a raucous romp and arrives on UK shores on 28June for its digital release from 101 Films.

Retired NASA test pilot Victor (Shatner – Star Trek, The Man From U.N.C.L.E.) and best friend Sal (Lloyd – Back To The Future, One Flew Over The Cuckoo’s Nest), love nothing more than causing chaos by joyriding Victor’s vintage convertible around their home town of Palm Springs. When Victor is caught speeding, he loses his precious driving licence and is forced to use public transport…his worst nightmare…but could it be fate? When he has a chance encounter with the friendly and charitable Caroline (Jean Smart – Frasier, Mare Of Easttown), he enlists Sal’s help with his attempts to win over her affection, but Victor has been alone for a long time and his prickliness is enough to put any woman off…

With his sights set on Caroline, Victor must curb his reckless impulses and learn to enjoy a quieter life – will he manage to woo the woman of his dreams and win back his other love, his licence to drive again?

Many thanks to Aim Publicity and 101 Films for providing the images above.

This article’s featured image: By Source, 101 Films, Fair Use